Six ghostly myths and legends will feature on a set of stamps to be issued by Jersey Post on 16 March, as part of the 2022 Europa stamp issue, Stories & Myths. The third in Jersey Post's Myths and Legends series, the issue focuses on ghost stories which have shaped Jersey’s history and culture. Two Europa stamps are included in the set and have been printed using a spot UV ink, which means that elements of the stamp illustrations take on an eery glow under ultraviolet light.

The six Jersey ghost stories depicted on the stamps are: The Vioge of Crack Ankle Lane, The Woman in Black, The Belenji, The Bells of Les Minquiers, The Bride and Groom of Gorey Castle and The Soldiers of Vinchelez Lane. The two Europa stamps (The Belenji and The Bride and Groom of Gorey Castle) have also been presented together in a Souvenir Miniature Sheet.

Commenting on her design process, the stamp artist Jensine Eckwall says: 'All the images were created digitally. They might not look very computer-y at first glance, but I like how that choice brings these images and stories into the present and the future, where they belong. I hand-drew everything with digital brushes that emulate shaded graphite or charcoal and grainy shader brushes that lay down complex dot patterns. Then, from these swirling areas of light and dark that the tools would create, I picked out ghostly forms, animals in the clouds, swap mist, and pinprick stars, bringing these disintegrated images into visible form with carefully placed areas of light and dark. To me, this way of drawing represents the moving and shifting atoms of all matter- the "real" things we see and touch, things we feel but cannot see, and the things we see but cannot feel. I'm so grateful to Jersey Post for the opportunity to explore Jersey and its myths and legends.'

Located in Queens, New York, artist Jensine Eckwall’s principal practice is book illustration and she has illustrated children’s and adult literature in the horror, fantasy, science fiction and historical genres.

Each year, European postal administrations are given a stamp issue title to interpret and illustrate by PostEurop’s Stamps & Philately Working Group. PostEurop is the trade association that has been representing European postal operators since 1993 and the aim of the annual joint stamp issue is to build awareness of each other’s culture and history, with Europa stamps eagerly sought by collectors around the world. 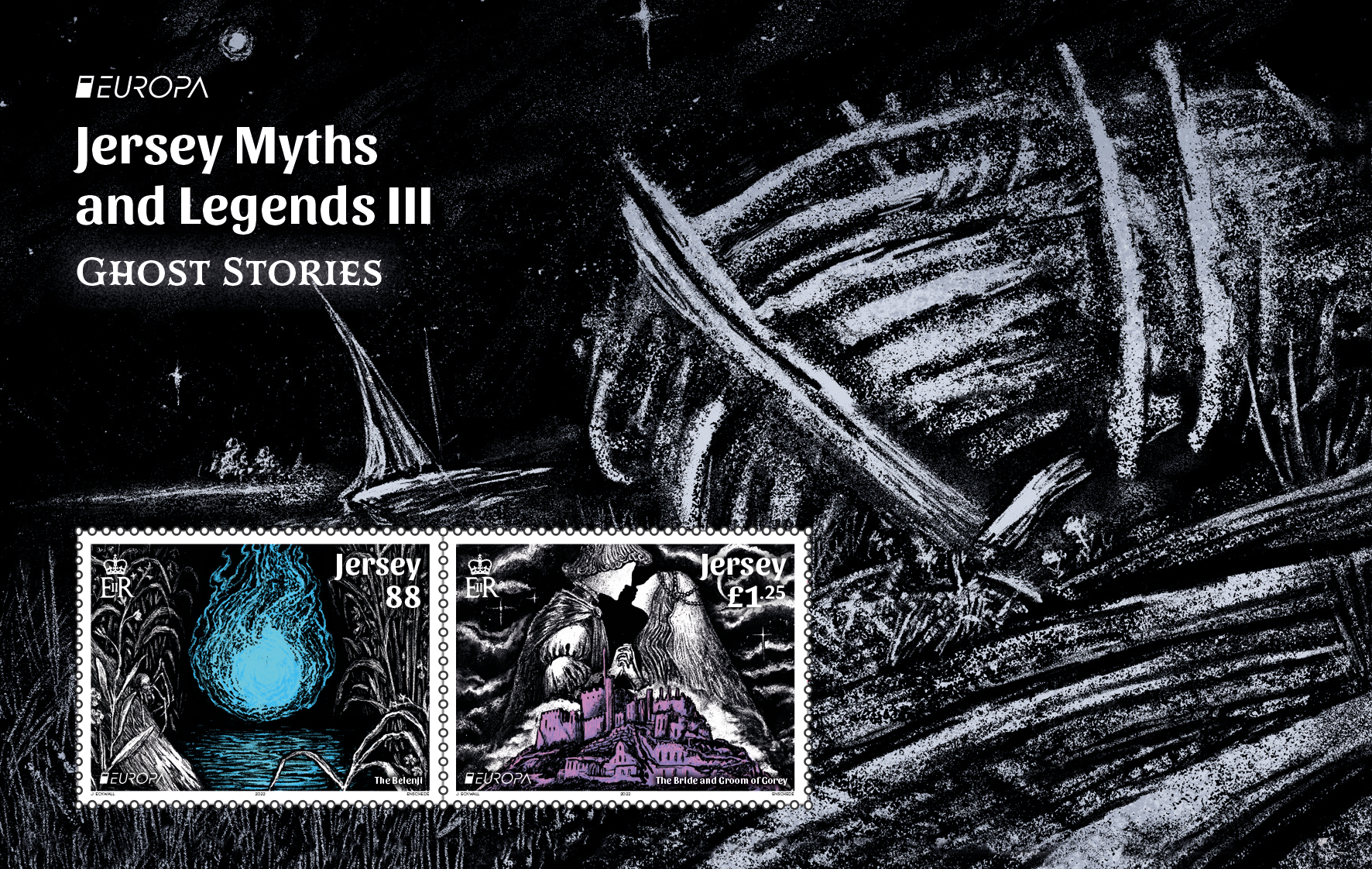 Jersey Post’s Europa 2022 – Jersey Myths & Legends III – Ghost Stories stamps will be available to buy from all branches of Jersey Post from 16 March 2022, whilst philatelic stamp products such as souvenir miniature sheets, first day covers and presentation packs will be available from the Jersey post offices at Broad Street, St Helier and Rue Des Pres, St Saviour on issue day. All items can be ordered now at www.jerseystamps.com or by telephoning the Jersey Philatelic Bureau on: + 44 (0)1534 616717.